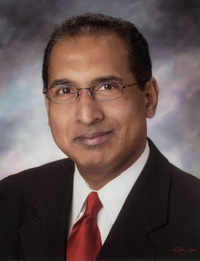 Bopanna B. Ballachanda, PhD, holds a doctoral degree in auditory neurophysiology from the University of Texas-Dallas and is the founder and CEO of Premier Hearing Center which has several audiology clinics in Arizona, New Mexico, and Texas. He has worked as an Assistant Professor of Audiology at Purdue University and an Associate Professor in Speech and Hearing Sciences and an adjunct Associate Professor in the Department of Otolaryngology at the University of New Mexico. Dr. Ballachanda is also a member of several professional and scientific societies, and has published articles in peer-reviewed and clinical journals. He spearheaded the first cerumen management workshop for audiologists in 1992 and is nationally and internationally recognized for his workshops and lectures on cerumen management. He was a member of the American Academy of Otolaryngology-Head and Neck Surgery task force that developed and published Clinical practice guideline: Cerumen impaction in 2008. He was elected to the Board of Directors of the American Academy of Audiology.

Books by Bopanna B. Ballachanda