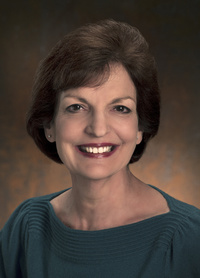 Brenda Smith, DMA teaches voice, singer's diction and pedagogy at the University of Florida. Dr. Smith holds degrees in vocal performance and pedagogy from the University of Evansville, Westminster Choir College, and the University of Maryland with further study at the Hocschule für Kirchenmusik der Ev. Kirche-Herford and the Hochschule für Musik und darstellende Kunst/Hamburg in Germany. Dr. Smith works regularly with choirs and is active in singing in singing voice research related to the aging process. Dr. Smith has collaborated with Dr. Robert T. Sataloff, MD, DMA, to promote vocal health through choral singing, including two textbooks, Choral Pedagogy, 3rd ed. and Choral Pedagogy and the Older Singer. Dr. Smith, author of So You Want to Sing for a Lifetime: A Guide to Performers (2018), is the 2000 Val Lawrence Fellowship recipient, in recognition of demonstrated excellence in teaching and interest in voice science presented by NATS and the Voice Foundation.

She has been widely recognized for her contributions to the concept of lifelong singing through proper voice care. Dr. Smith is a lyric soprano with special interests in the recital and concert repertoire. In addition, Dr. Smith was translator, collaborator, and assistant to Dr. Wilhelm Ehmann and Dr. Frauke Haasemann, the pedagogues whose work in Germany and the United States developed the concept known as "voice building for choirs". Dr. Smith works regularly as consultant, clinician, and conductor with amateur and professional choirs. She has been associated with the choirs of St. Ignatius Loyola, the Central City Chorus, and the Dessoff Choirs in New York City, the Mendelssohn Club of Philadelphia, the Cathedral Choral Society of the National Cathedral in Washington, D.C., as well as the choirs of the Epiphany Cathedral in Venice, Florida. As an active member of the National Association of Teachers of Singing and the American Choral Directors Association, Dr. Smith speaks as a resource for solo singers, voice teachers, and choral conductors.

Dr. Smith has collaborated with Dr. Robert Thayer Sataloff, implementing projects to promote vocal health through the choral experience and has presented her work regularly at the International Symposium on the Care of the Professional Voice, sponsored by the Voice Foundation. In June 2000, Dr. Smith was honored by the Voice Foundation and the National Association of Teachers of Singing as the recipient of the Van Lawrence Award in recognition of her demonstrated excellence in teaching of singing and her active interest in voice science and vocal pedagogy. As the Van Lawrence winner, she traveled to the Royal Institute of Technology in Stockholm, Sweden during May 2001 to pursue topics in the acoustics of the voice with Dr. Johan Sundberg. With Dr. Sataloff, Dr. Smith is the author of Choral Pedagogy, now in its 2nd edition, (Plural Publishing, 2006).
She is the translator of Voice Building for Choirs by Wilhelm Ehmann and Frauke Haasemann (Chapel Hill, NC: Hinshaw Music, Inc.; 1980). Dr. Smith is the author of Cantare et Sonare: A Handbook of Choral Performance Practice (Hinshaw Music, Inc, 2006) as well as numerous articles on issues of vocal/choral music pedagogy and performance. Dr. Smith serves as Consulting Editor on Singing Voice for Plural Publishing.
In recent years, Dr. Smith has been active in singing voice research related to the aging process. Currently, she is involved with projects associated with the Center for Arts in Healthcare at the University of Florida. With Professor Ronald Burrichter, she directs a program called "Sing for Life", offering singing voice strategies to Parkinsons patients and their caregivers. She and Professor Burrichter are consultants to the Oak Hammock Singers, a choral organization at a continuing care retirement community in Gainesville.
She has taught at Westminster Choir College, Dickinson College, Rowan University of New Jersey, and State College of Florida in Bradenton, Florida. As Coordinator of Musical Activities at the German School of Middlebury College in Vermont, Dr. Smith founded and directed the "German for Singers" program, a curriculum combining culture and language study with vocal performance. Dr. Smith holds degrees in vocal performance and pedagogy from the University of Evansville, Westminster Choir College, and the University of Maryland with further study at the Hochschule für Kirchenmusik der Evangelischen Kirche-Herford and the Hochschule für Musik und darstellemde Kunst/Hamburg in Germany.

Choral Pedagogy and the Older Singer

Diction in Context: Singing in English, Italian, German, and French