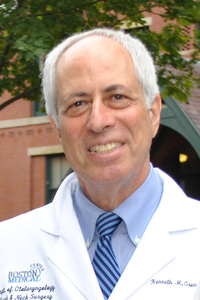 After completing his residency in otolaryngology in 1977 at what was then known as the Boston University-Tufts University Combined Otolaryngology Residency Program, Kenneth M. Grundfast, MD, FACS, FAAP went to the Children's Hospital of Pittsburgh for a one-year fellowship in pediatric otolaryngology, and upon completion of the fellowship, he joined the faculty of the University of Pittsburgh School of Medicine with a clinical appointment in the Otolaryngology Department at the Children's Hospital of Pittsburgh. In 1980, he became Chair of the Department of Otolaryngology at the Children's National Medical Center in Washington, DC, where he remained until 1996. In the academic year 1989-1990, he took a one-year sabbatical to pursue research on hereditary deafness at the National Institute on Deafness and Communication Disorders. In 1999, Dr. Grundfast returned to Boston be accept the position that he still holds as Chair of the Department of Otolaryngology at the Boston University School of Medicine and Chief of Otolaryngology at the Boston Medical Center (BMC). Dr. Grundfast has held leadership positions, including holding the office of president of the Metropolitan Washington DC ENT Society; the American Society of Pediatric Otolaryngology; the Society for Ear, Nose, Throat Advancements in Children; and the New England Otolaryngology Society. He has also served as vice president of the American Academy of Otolaryngology-Head and Neck Surgery. He has been the recipient of many awards and commendations, including being listed repeatedly for more than 10 years in Boston Magazine as one of Boston's "Best Doctors," and he received from the Society for Ear, Nose, Throat Advancements in Children (SENTAC) first a Lifetime Achievement Award and, more recently, the SENTAC Humanitarian Award. Although Dr. Grundfast spent the first half of his career as a pediatric otolaryngologist, since he became chair of otolaryngology at the Boston Medical Center, his clinical practice has focused on diagnosis and management of ear and hearing disorders in adults and children. Dr. Grundfast has an interest in biomedical ethics, and he served for 10 years as chair of the BMC Ethics Committee.