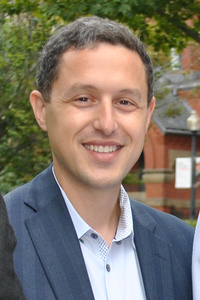 Michael P. Platt, MD, MSc, FAAOA is Associate Professor and Residency Program Director in the Department of Otolaryngology-Head and Neck Surgery at the Boston University School of Medicine. He grew up in northeastern Pennsylvania and attended the University of Scranton, receiving a BS degree in Biology 1994. After receiving an MD degree from Jefferson Medical College in 2002, he did a residency in otolaryngology-head and neck surgery at Albany Medical Center from 2002 to 2007. Subsequently, he went on to pursue a one-year fellowship in endoscopic sinus surgery at the Massachusetts Eye and Ear Infirmary. He joined the faculty of the Department of Otolaryngology-Head and Neck Surgery at Boston University School of Medicine in 2008. During his tenure at Boston University, Dr. Platt completed a master's degree in Clinical Bioinformatics in 2014, served as Quality and Safety Officer for the department from 2013 to 2015, and became Residency Program Director in 2016. Dr. Platt is the author or coauthor of 42 scientific reports and book chapters. He has been elected to the Board of the American Academy of Otolaryngic Allergy and sits on the Editorial Board of the International Forum of Allergy and Rhinology. Dr. Platt has an interest in research relating chronic sinusitis to allergic disease, novel methods for residency education, and risk management education through Scary Cases conferences.