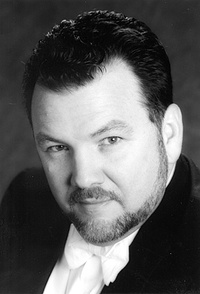 Stephen F. Austin, is associate professor of voice. Dr. Austin joined the faculty of UNT in 2001 after several years of teaching at Louisiana State University. He teaches applied voice and vocal pedagogy. Dr. Austin received a masters degree in vocal performance from UNT and continued his studies at the University of Iowa where he earned the Ph.D. in voice science from the Department of Communication Disorders under the direction of Dr. Ingo Titze. His unique training in performance and voice science has placed Dr. Austin at the forefront of interdisciplinary work in vocal pedagogy. Dr. Austin is an active performer, published author, and a popular lecturer in vocal pedagogy and voice science. He has presented recitals, lectures, and master classes across this country, in England, The Netherlands, and in Australia. He is regularly featured on the faculty of the "Annual Symposium: Care of the Professional Voice" sponsored by the Voice Foundation and held in Philadelphia each summer. He has made presentations to the national conventions of the America Speech and Hearing Association, the Music Teachers National Association, and to the National Association of Teachers of Singing (NATS). He has offered lectures and master classes at national and international conferences and workshops including the Westminster Choir College Summer Workshop, the international meeting of the Physiology and Acoustics of Singing Conference, the NATS mid-winter workshops, and recently the Pan European Voice Conference held in London, England. He has also appeared as special guest for the New York Singing Teachers Association. Dr. Austin is known for his ability to clarify for the voice teaching community the complexities of voice science and to make it applicable to the studio teacher and singer. His articles on this subject have been published in AUSTRALIAN VOICE, the journal of the Australian National Association of Teachers of Singing and in the JOURNAL OF SINGING. He writes a featured column in the JOURNAL OF SINGING called ?Provenance? where he examines the historically significant treatises on vocal pedagogy and elucidates important pedagogical principles from the past. His scientific research has focused on the articulatory behavior of classically trained singers and has been published in the JOURNAL OF VOICE. He is a member of the editorial board of the Journal of Singing, and serves on the Voice Science Advisory Committee of NATS. He is also a member of the Science Advisory Committee of the Voice Foundation. A successful teacher, he has students singing professionally in this country and in Europe.

Bassini's The Art of Singing