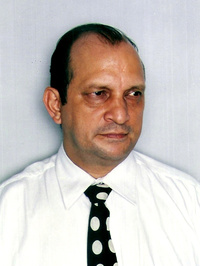 Chris de Souza MS, DORL, DNB, FACS, FRCS trained at the University of Minnesota with Dr. Michael Paparella, and completed his externship in otology and neurotology with Dr. Michael Glasscock and Dr. C. Gary Jackson at Baptist Hospital in Nashville, Tennessee. He furthered his training in India and was given the gold medal in the DORL exam from the College of Physicians and Surgeons in Mumbai, India. In 1995, Dr. de Souza was the second person in the world to be awarded the Orbit Silver Medal for his work on the nose, paranasal sinuses, and skull base. He was appointed visiting assistant professor of Otorhinolaryngology-Head and Neck Surgery at the State University of New York, Brooklyn and also at the Louisiana State University Health Science Center, Shreveport, where he has conducted temporal bone surgery workshops. He has held these appointments for the past 16 years. Dr. de Souza has published extensively in internationally peer-reviewed journals and several of his publications are considered landmark papers. He has published 18 postgraduate ENT medical textbooks in the United States, Germany, and India. Currently, he is editor-in-chief of the International Journal of Head and Neck Surgery. Dr. de Souza's current clinical appointments include senior ENT consultant at Lilavati Hospital, Tata Memorial Hospital, Holy Family Hospital, and the Holy Spirit Hospital in Mumbai, India, and he is also the coordinator for implantable hearing devices in children and adults at Holy Family Hospital.

Surgical and Medical Management of Diseases of the Thyroid and Parathyroid