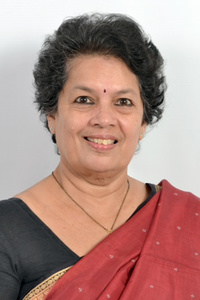 Prathibha Karanth, PhD, received her MSc (1971) and PhD (1981) from the All India Institute of Speech & Hearing (AIISH) in India. For 25 years, she worked on neurogenic communication disorders in adults and children at the National Institute of Mental Health and Neuro Sciences and AIISH. In 2003, she set up the nonprofit Com DEALL Trust to support the Communication DEALL Early Intervention Program, developed by her in 2000, now scaled up to over 20 units across India. She is associated with academic institutions such as SRCISH and NIAS in Bangalore and serves on scientific advisory committees of the Government of India and other academic institutions.

Dr. Karanth has published over 20 books and manuals and over 80 scientific papers/book chapters, and she has made over 300 presentations. She is the series editor for CommunicAids, a resource provider for those with communication disorders, and has also served as an editor for many professional journals. She is the recipient of several awards and grants and was twice president of the Indian Speech & Hearing Association. For more details, visit communicationdeall.com and academia.edu.